This year marks 25 years of Carlsberg’s relationship with Liverpool FC, and what better way to celebrate the longest standing relationship in the Premier League than with a dedicated brew?

The special beer, which launches in October, uses hops that have been cultivated using footage from Liverpool matches by scientists at the Carlsberg Research Laboratory.

“We’ve tried to make Liverpool more of a part of us than ever before. After all, we’ve been a part of the club for 25 years now!

“Scientists believe that plants aren’t only affected by light, but also sound, vibrations and other energies too. That’s why we decided to literally put Liverpool into the cells of our hops – exposing them to 25 years of Liverpool matches, fans and legends - including Jürgen Klopp himself, who visited earlier this year. They were even grown in soil from Anfield!”

Carlsberg’s relationship with Liverpool began in 1992, when the brand was first displayed on the famous red shirt. 25 years later, Carlsberg is synonymous with the club, and vice-versa, as the relationship continues to blossom.

“Simply-put, we’re a family. We’ve been together for so long that I think we share a lot of the same values. For example, we’re immensely proud of our heritage but always looking ahead – which I feel is true for both of us.

“We have always really embraced the whole club, from top to bottom, and since we’ve been there for so long we have a special relationship with so many people there. Ex-players spanning different generations still regularly visit our lounge because they feel at home and welcome and they have done for so many years.”

The synergies between Carlsberg and Liverpool FC go further than simply their link to football, however. The global presence of the club means that a big part of Louise’s role is bringing the partnership to life in Carlsberg markets across the world.

“Liverpool’s global fan-base matches the footprint of our focus areas. For example, the club is just as huge in Asia as it is in the UK or Denmark, which is a key focus area for our business.

“I’ve been managing the partnership for six years, which involves day to day contact, making sure that we use all the great assets globally and running the experiences we offer, which includes giving people around the world the once in a lifetime experience of visiting Anfield.

“I’ll admit that during that period, I’ve made a few grown-men cry by introducing them to their heroes. I’ll mention no names!” 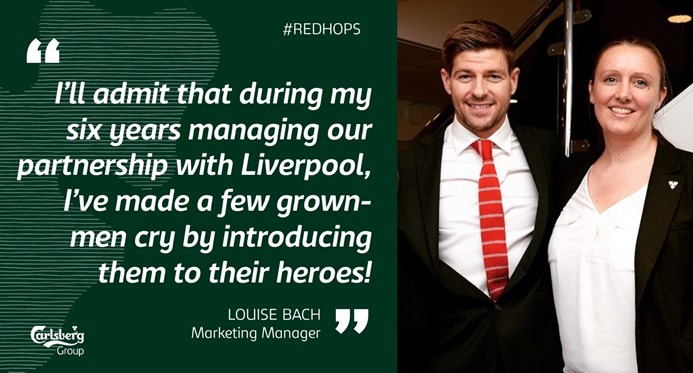 The global interest in Liverpool is no more relevant than in Scandinavia, which Louise believes is down to multiple factors.

“Liverpool is huge not only in Denmark, but in Scandinavia generally which I believe is down to a couple of reasons.

“Firstly, there have been some iconic Scandinavian players playing for the club over the years such as Jan Mølby, Jon Arne Riise and Daniel Agger.

“Clearly, the link between Carlsberg and the club hasn’t hurt, and we still see a lot of people wearing the retro shirts carrying our brand, today. I think there’s an affinity and pride with seeing a Danish brand on such an iconic shirt."

Whilst Louise has managed the relationship for six years, she has been involved for nine – and picking out a highlight from that period proves difficult.

“I’m lucky to be working on such a special partnership. One of my favourite parts about the job has been working with a lot of the players. I’ve found them all to be very humble, and there is a certain way that they carry themselves, which is testament to the club. Their passion for the club and the city trickles through, which is great to experience – and the fact that so many legends are still involved in the club says it all!

“From a football perspective - it is difficult to single out a highlight, but last season’s UEFA Cup semi-final against Borrusia Dortmund takes some beating!”

Despite the relationship spanning three decades, Louise is keen to continue exploring new creative ways to bring the partnership to life.

“Since the beginning, we have always focused on how beer can make football better. But now, we are turning it around, and showing how football can make beer even better.

“This is true for the Red Hops experiment. We are going in a new direction - using our focus on science and our relationship with the club to brew something special.

“Going forward, we will continue to act as a family. I truly believe that they are part of our DNA and we are part of theirs.”

Find out more about the celebratory beer here, and watch the film below: